It's the morning after Halloween - such good fun last night!  In England, Halloween is slowly catching on, and I love the growing community spirit surrounding the night.  I love the effort the parents and children put in to their costumes and their eager faces when you open the door.  We're very lucky here that the children dress like devils but behave like angels for the night - they only go to houses with signs of Halloween decorations and are enthusiastically polite over treats given out.

Last year, the treats were bookworms: 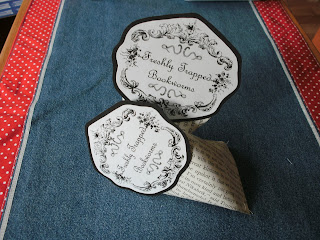 Book page pouches, with printed labels stapled on and filled with jelly worms.  I can't remember how many of these I made, and it was my very first halloween living within reach of neighbours who might trick or treat. We ran out :/  Those last few children were given Christmas candy canes out of desperation!

This year, I started off by making broomsticks.  I found sweets packaged to look like pencils for the base, printed out sheets of "wood" to wrap around them and finished with twigs and twine to complete the broomstick.  The sweets were 20 for £1 - it's a great way to make cheap sweeties look special.  You could probably use pixie sticks instead. 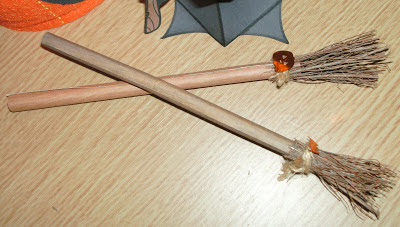 Here they are ready to give out: 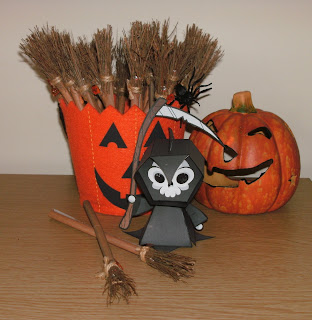 I also made little pouches out of fabric with printed card labels (if anyone's interested in the labels, I can publish them as a pdf).  Jelly snakes for decomposing eels and skidaddles for bat poo!  Note to self:  these were much faster to craft in bulk than the labour intensive broomsticks...and you need to do at least 60 of them next year...'k? 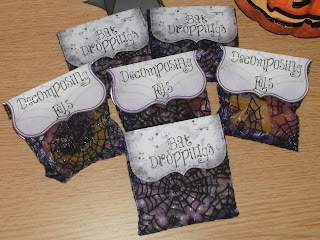 And using the same fabric, a little bag stuffed with Halloween treats for a friend's daughter 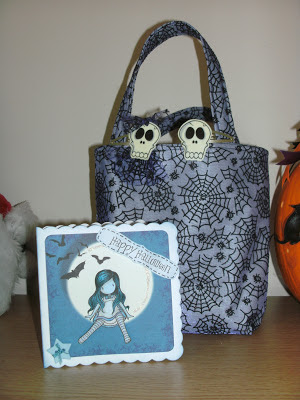 The skulls are hair clips made out of  printable shrink plastic (skulls taken from a free digikit - Spooktakular  available from Daisytrail) and hot glued onto clips.  I also played some more with my alcohol markers and a Gorjuss On Top of the World stamp. (Edited to add I've entered this in the weekly challenge over on http://totallygorjuss.blogspot.co.uk)

I also made a card for my son, again taken from the same free digikit.  He had posh Halloween chocolates from Hotel Chocolat (honestly, I didn't choose them because I knew he'd share....ahem) 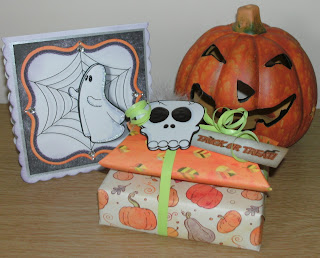 Even the knife block got mummified!  Free printable from What I Made - check out the rest of the site, it's visually stunning and there's some great projects on there. 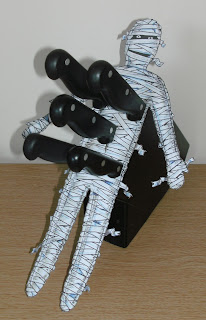 Finally, we made two pumpkins - one real for outside, and other out of papier mache for indoors.  The papier mache one was a pain to be honest - I'd forgotten just how time consuming it is to build up the layers with the drying time in between.  I used a punch ball balloon which happily started to deflate after the first layer was put on.  I cursed it at the time, but it's actually made a more realistic mishapen pumpkin that Mother Nature might have come up with.  It blocked up my crafting table for over a week.  I used orange, brown and yellow acrylic paints to colour it and then drilled holes in a swirl design with an electric drill (tip - use a face mask next time...orange gunk when you blow your nose...not attractive!)  It's a little lame in the daylight, but looks really pretty when its lit at night, honest. 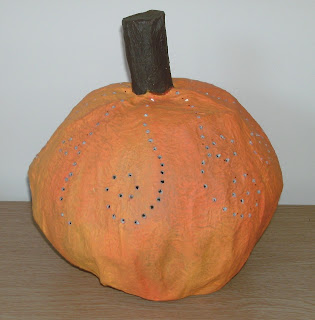 The real pumpkin got drilled too - this was so much fun to do apparently (my son insisted on doing the grrrr...manly thing with a power tool)  We punched out one larger hole to shove artistically arrange a plastic rat in, hot glued smaller mice to the outside and used a battery operated 20 green led light set in the smaller holes, while the rest had white light shining out from a powerful led push light.  I pinned a triple bow to the top.  This was easily the fastest and simplest pumpkin we've ever done, but it looked really effective. 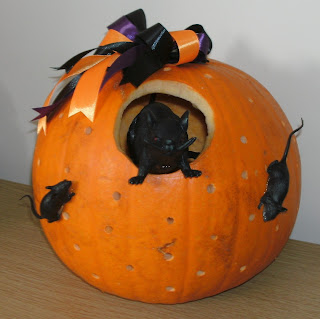 I stood it on an upturned waste paper bin which is an opaque plastic and hot glued glow sticks inside it. 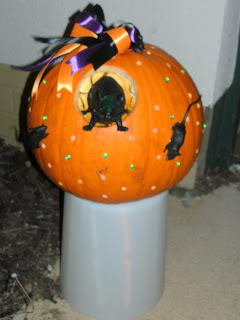 Very blurry picture without the flash.... 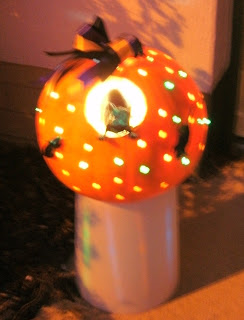 As it's blustery, but gloriously sunny this morning, I'm off to wrap up and sit in the garden with a cosy mug of hot chocolate - Autumn is my favourite season, and I want to make the most of it while it lasts!