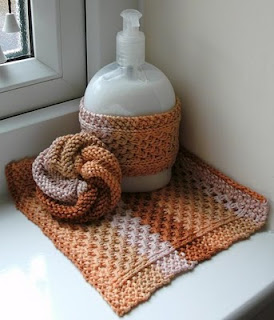 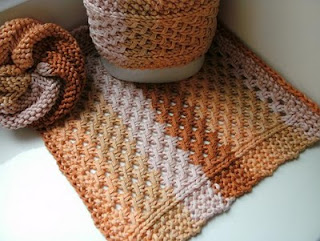 My cloths measure around 7" square, because I prefer a smaller cloth. If you'd like to make yours larger, increase number of stitches cast on in multiples of 3, and adjust the number of rows accordingly. 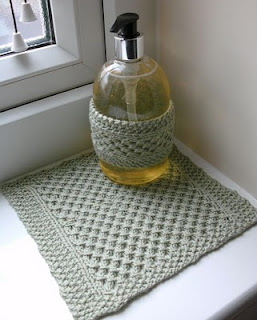 The green set has a slimmer sleeve on the soap - 15 stitch cast on. I was experimenting, but prefer the sleeve to be larger - might try a 21 stitch cast on next time. The Green Set is destined for my bathroom, rather than kitchen and therefore the cloth will be used on my face. With that in mind, I used Rowan Luxury Cotton DK - 50% cotton, 50% viscose and 5% silk - it's wonderfully soft and kind to my skin. 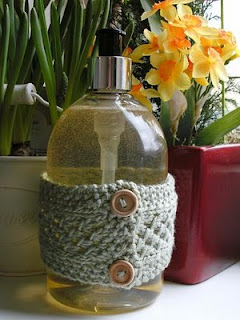 Finally, I used Regia 4ply bamboo sock yarn to make a sleeve for a candle jar (I think I just spent a few days totally addicted to the lace mesh pattern to be honest) 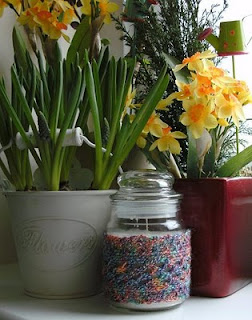 Holler at me if there are any glaring errors - there shouldn't be, I've checked it carefully...but if there are, yell. Loudly. Edited to add that there was an error, that has now been corrected...many thanks to SouthernComfortKC on Ravelry for pointing it out :)
x
Posted by Coffee And Cream at 15:43 21 comments:

I'm so bad at blogging! Lots of knitting has been cast on and completed since my last post. All of them are little projects and spurred by Ravelympics 2010.
I set a personal challenge to myself to complete 20 projects and enter 10 different events (without entering a project in more than one category). I'm getting there, I think!
Must work out how to make a photo mosaic on flickr of progress so far.
In the meantime, have a picture of liquid soap, both cheap and cheerful - I think the Sainsbury's one was 50p and the Baylis & Harding one set me back a whole pound :p - 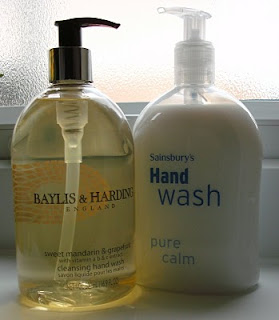 New knitting pattern coming soon to posh them up a bit! I'm determined that all gifts this year will be handmade, and will not tax my bank balance, but instead have love and thought in them.
Posted by Coffee And Cream at 05:39 No comments:

Stripey bunnies! Another half a dozen bunnies for the Cats Protection centre, this time in stripes. Same pattern as below, but I changed colour every 4 rows (apart from the green stripey bunny, which changed ever 2 rows). Pictured with an itty bitty heart for Valentine's Day :)
This kicked off Ravelympics 2010 for me beautifully.
Started and finished a few more projects - a cupcake pincushion, a little grey rabbit and a new blanket for Catalpa, which is made of the sort of yarn you're embarrassed to admit you've bought but is perfect for a kitty blanket... 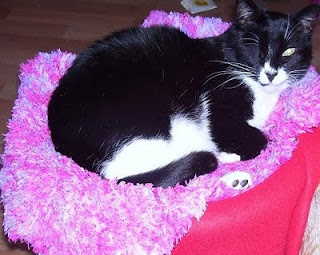 It's Wendy Velvet Flake, bought in Kemp's sale for......79p a ball. Catalpa loves it. Such a manly colour for him too *snigger*
I'm just in the process of knitting a baby hat and all-in-one and then I might have a go at writing another pattern that's forming in my mind (and will be another category to enter for the ravelympics :p)
Posted by Coffee And Cream at 06:24 3 comments:

Thank you so much for the lovely comments on the bunnies - I can't tell you how thrilled I am :) First picture from someone else was posted on Ravelry yesterday - I literally bounced!
Last week led to some tough decisions, resulting in us returning Juniper to the shelter. He had a few personal hygiene problems (refusing to wash himself, rubbing his feet in the litter tray and then decorating the house with poo paw prints...). It seems such a trivial thing, but when you catch yourself sitting on the floor in tears at 1am for the third night on the trot cleaning up kitty poo, you realise you just can't cope with that for potentially the next decade. Despite the shelter's reassurances, I am racked with guilt for returning him although I know it's the right decision for him and for us.
Catalpa continues to settle into our home with ease. In contrast, he is a darling cat. DS has always tolerated my love of cats, rather than sharing it, but Catalpa has changed all that and is currently upstairs curled up on his lap while he studies.
In other news, I have completed a few more knitty projects - the Zinnia dishcloth and my first KAL from KrisKnits. Love them both :) I've signed up for this year's Ravelympics on the Knitted Toy team, so just deciding what to knit for the duration. I'd like to make some stripey catnip bunnies, and I've a copy of Debi Birkin's new pattern, Pip to work up. Mother's Day is looming in the UK too, so a suitable project for my mum will need to be sourced too - so if anyone reading this has any ideas, please share!
Posted by Coffee And Cream at 05:23 1 comment: 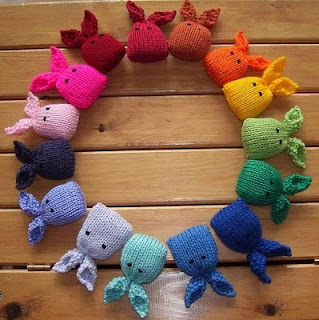 These are the bunnies I've been knitting for Cats Protection. They're small, quick to knit, ever-so-simple 2 needle affairs with only the tinsiest bit of seaming required on the ears. Perfect for using up scrappy bits of yarn, and spreading kitty happiness :) I thought I'd offer my pattern for anyone who'd also like to give them a whirl. This is the first pattern I've written up, so apologies for it being so waffly. I've included lots of photos to help you decipher what I'm talking about! 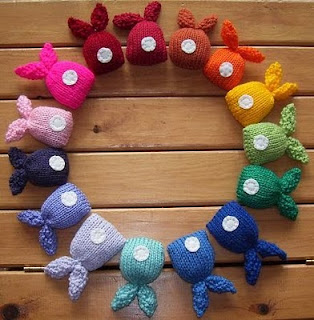 Pattern is available as a free pdf download on ravelry right here.
This pattern can be printed for your personal use, but please don't sell or copy it. Finished pieces may be sold for charity fundraising.

Busy with the knitting needles recently :) First a little notebook covered in yarn, felt and tiny buttons. Yarn is vile acrylic, but perfect for this little project. I had some red dotty felt that was ideal for the fly agaric cap, embroidered the stalk and sewed on tiny little blue and yellow flowers. Undecided yet to have this as a handbag present for me or to give it to my sister for her birthday in March... 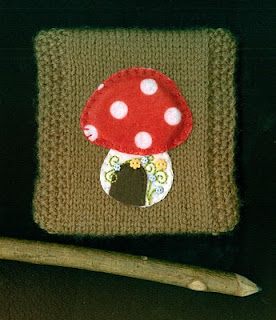 And 3 little catnip toys knitted and presented to Catalpa and Juniper - a mouse, an egg and a heart. Here's Catalpa showing his appreciation for his new friends... 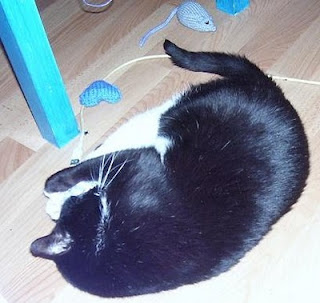 I've also been busy knitting little catnip bunnies for Cats Protection - a whole rainbow of them. Just working one more and taking pictures at each stage so I can write up the pattern and offer it on here and on ravelry.
Posted by Coffee And Cream at 16:18 No comments: